Praised for her “dramatic voice of a real fine quality” and her “breathtaking, passionate and eclectic charisma on stage”, Italian mezzo-soprano Elena Bresciani made her debut very young, in 1999 in Verdi’s La Traviata (Flora) and J.S. Mayr Che originali (Celestina).

Recently, she also sang at the Teatro Filarmonico in Verona with the famous Italian soprano Fiorenza Cedolins receiving great critical acclaims. In 2012, she was also Celia Peachum (Threepenny Opera - Giorgio Strehler Italian Version) at the Teatro Goldoni in Livorno conducted by Nathalie Marin and she also performed a recital at the Teatro Bibiena in Mantova. In 2013, she performed Respighi’s Tramonto and Casella’s La favola di Orfeo (Driade/Baccante) at the Teatro Diego Fabbri in Forlì.
Recording include Donizetti’s Il Campanello (DVD Bongiovanni).

Chosen by the Mascagni Festival, Elena opened 2009/2010 season at the TG of Livorno with soprano Fiorenza Cedolins, singing Mascagni’s Cavalleria Rusticana, Zanetto and Amico Fritz (Beppe role) conducted by Fabrizio Maria Carminati. Elena was invited to perform at the International Festival Marie Kraja in Tirana with the Tirana Philharmonic Orchestra. The Festival was broadcasted on worldwide TV.

An accomplished recitalist, Elena Bresciani has performed at Carnegie Hall in New York (Weill Recital Hall), in the UK including London, Oxford and Cambridge, at many venues all over in Italy, Switzerland, Albania and at the Varna Palace of Culture in Bulgaria. In 2001, Elena was invited to sing in Verdi's Anniversary Celebrations in Milan with outstanding mezzo-soprano Giulietta Simionato. Elena also specialist in the Italian vocal chamber music repertoire of the nineteenth and twentieth centuries.

Italian mezzo-soprano Elena Bresciani graduated with Honours at the Conservatorio Gaetano Donizetti in Bergamo. Elena holds a degree in Italian Literature at Milan's Universita' Statale and followed by a postgraduate diploma in Theatrical Arts and Drama at the Universita' Cattolica in Milan. In 2006, she was appointed Fellow of Trinity-Guildhall in Voice Performance in London. Her teachers have included Carlo Meliciani, Julia Hamari, Phyllis Curtin, and Fiorenza Cedolins. She lives in northern Italy and she is also a well-recognized watercolorist.

WARM, SOFT AND ENVELOPING VOICE, BENT WITH MASTERY TO THE TECHNICAL DICTATES AND LYRICAL INTERPRETATION. WE SAW HER GO INSIDE DISPARATE CHARACTERS, BITING THE STAGE WITH THE ENERGY AND CHARISMA OF A GREAT PERSONALITY. (Filippo Tadolini, director and artistic director Forli per Giuseppe Verdi) 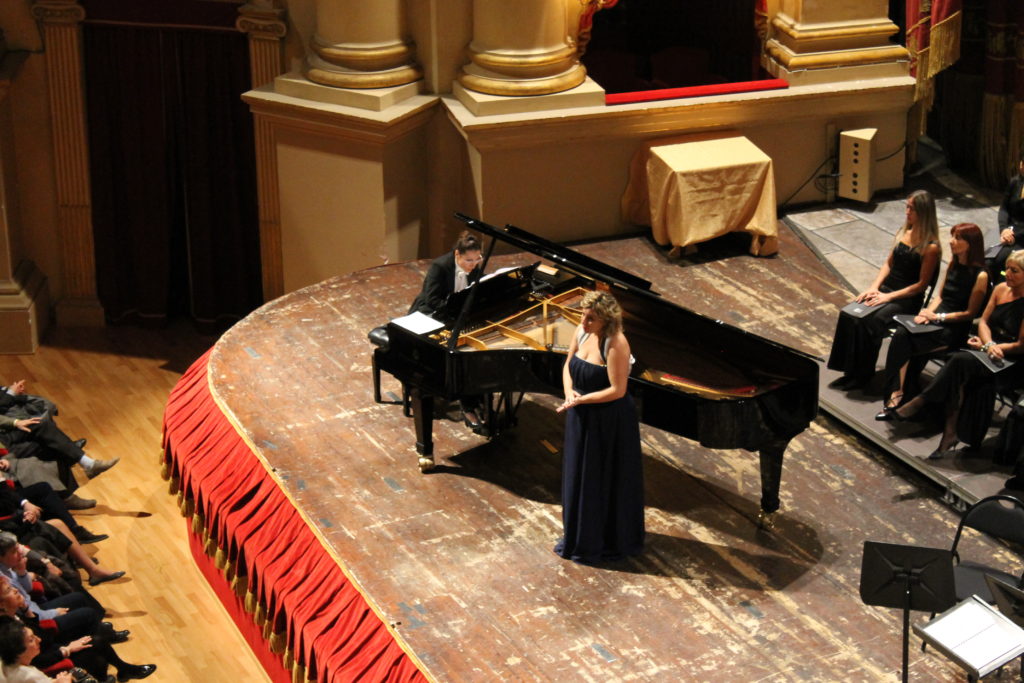 Elena Bresciani at the Teatro Filarmonico in Verona